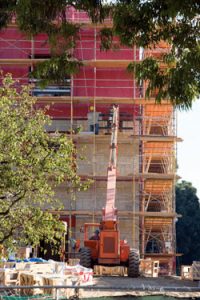 The skyline of the Civic Center Plaza in Santa Ana, Calif. is enjoying a dramatic red shock of color this spring. The colorful, though temporary, effect is courtesy of 1,680 gallons of RedGard® Waterproofing and Crack Prevention Membrane from Custom® Building Products, which was used in the construction of a new California Court of Appeals courthouse.

The plaza is home to Santa Ana City Hall, county government offices, a United States Federal Courthouse and the Orange County Courthouse. Currently, the eight Court of Appeal justices and its staff are divided between two small facilities nearly a mile apart. The new Court of Appeal is situated on a 2-acre site in the heart of the Civic Center Plaza, and is being constructed under the auspices of the California Administrative Office of the Courts.

Architectural firm, Carrier Johnson, Costa Mesa, Calif., designed the new three-story, 53,500-square-foot building according to the California Trial Court Facilities Standards to meet the needs of security, safety, traffic and volume of court cases that increase each year. These standards include new mandates for exterior construction that require moisture proofing to prevent the introduction or long-term growth of mold or other pathogens that could have negative effects on indoor air quality. 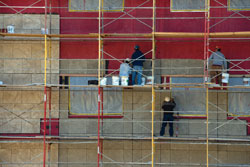 The building’s design calls for a façade of 25-inch imported limestone tile. Originally, Carrier Johnson had specified a different manufacturer’s products for the installation; however, budget constraints called for a more cost-effective solution and the project’s general contractor needed a supplier who could provide technical consultation and weekly on-site inspections. As a result of these mandates, tile contractor, American Tile & Brick Veneer, Signal Hill, Calif., worked with Territory Manager, Devin Dickey and Architectural Consultant, Dale Roberts, Custom, to provide a complete installation system at a more competitive price, a complete 10-year systems warranty, and detailed on-site inspections each week to ensure the integrity of the installation on this high-profile project.

Key to the installation is RedGard, a liquid-applied elastomeric membrane that creates a continuous waterproofing barrier and provides outstanding adhesion, meeting ANSI A108.1 and A118, as well as IBC, IRC and IPC standards. The application of RedGard beneath the stone allows the building to “shed” water and exterior moisture, rather than have it leak through the stone veneer and intrude into the substrate, potentially compromising the structure. While the cost of a waterproofing membrane is usually a small fraction of the overall construction budget, its failure can be catastrophic in terms of cost and damage. Therefore, Custom’s combination of product quality, warranty protection and technical support provided crucial peace of mind to the owners, contractors and all invested parties. 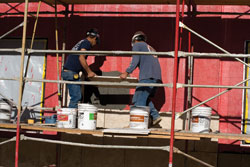 In addition to RedGard, Custom’s installation system for the Court of Appeal project included CustomCrete® Latex Mortar Admix and Polyblend® Grout. RedGard was roller applied over the entire exterior of the building, giving the structure its trademark red appearance prior to the application of the stone. As RedGard cured, limestone was installed using a traditional blend of sand and cement, mixed with CustomCrete for added strength. CustomCrete increases the performance and bond strength of the mortar bed, while providing additional water resistance and improved shock absorption. To finish the job, tile joints will be filled with Polyblend Grout, rated ASTM C627 for extra-heavy commercial use and favored throughout the industry for its color consistency, fast-setting times and smooth texture.

Construction on the new Court of Appeal began in the fall of 2007, and was completed late 2009. The facility will set new standards for efficient appellate court design, with nine judicial chambers, a state-of-the-art courtroom, and workspaces with direct but controlled natural light and unobtrusive security measures – all within a structure built to the highest construction standards.