> Case Studies > Transportation/Entertainment > Custom Goes to Infinity and Beyond

Custom Goes to Infinity and Beyond 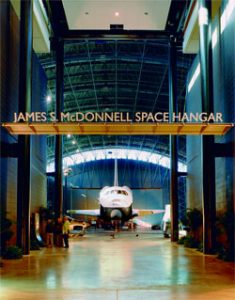 Home to famed artifacts from America’s aeronautical heritage such as the Enola Gay, the Spirit of St. Louis and the Wright brothers’ original Wright Flyer that flew at Kitty Hawk, the Smithsonian National Air and Space Museum is the world’s most visited museum. It is located on The Mall in Washington, D.C., and hosts over nine million guests per year. As the museum continued to grow and acquire massive items for exhibits such as the space shuttle Enterprise, it became apparent that a new, secondary location was necessary in order to share its dazzling treasures with visitors from across the country and around the globe.

Ultimately, the Smithsonian Institute selected a 176.5-acre site adjacent to Dulles International Airport in Chantilly, Va., as the site for the new facility. Named the Stephen F. Udvar-Hazy Center, after the project’s major donor, the new museum is a massive 350,000-square-foot exhibition space comprised of two hangars with 350 major exhibits on three levels including historic warplanes, military and commercial aircrafts and artifacts from the U.S. space program. A system of catwalks allows up-close views of planes suspended from the rafters. Notable exhibits include the space shuttle, Enterprise; the Boeing B-29 Bomber, Enola Gay, and a Concorde jet donated by Air France after the airline retired the trans-Atlantic luxury fleet. 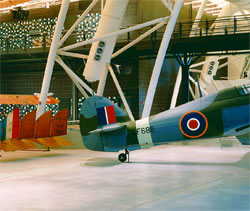 The new museum was designed by Bill Helmuth of Helmuth, Obata + Kassabaum (HOK), the St. Louis-based architectural firm that also designed the flagship National Air and Space Museum facility 25 years ago. Hensel Phelps Construction Co., Chantilly, Va., served as general contractor and enlisted David Allen Company to join the team as tile contractor. Porcelain and ceramic tiles are used extensively throughout the display areas, public corridors and restrooms, providing both the aesthetics and durability required for such a prestigious project that will host millions of visitors each year.

An abstract collage effect in subtle neutral tones of black, gray, navy and light blue is achieved with ceramic tile on walls throughout the facility and unpolished porcelain tile is used for the majority of the walkways. 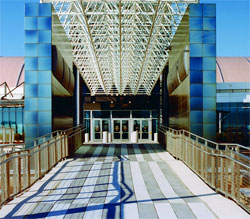 For installing the tile, HOK specified a tile installation system from Custom Building Products, citing the need for high-performing, reliable products that are supported with a manufacturer’s warranty. The use of LevelQuik Self-Leveling Underlayment ensured a level substrate and RedGard Waterproofing and Crack Prevention Membrane was applied in public restrooms and other areas where moisture was a potential concern. To set the tile, installation professionals combined MasterBlend™ Thin-Set Mortar with Acrylic Mortar Admix, a liquid polymer, to create a high-performance mortar with superior shear bond strength that would stand up to the rigors of high traffic areas. Polyblend® Grout, a standard in the industry, was used to complete the job. Both sanded and non-sanded formulas were used, in shades complementing the tile.

“Because we use these products from Custom on a regular basis, we knew they would be reliable, effective and easy to use, which was essential for a project of this magnitude,” said Vince McCoy, David Allen Co. “Premium products help ensure good results, and this job went extremely smoothly.”

The Udvar-Hazy Center opened on schedule on December 15, 2003, celebrating the 100th anniversary of the Wright brothers’ first powered flights. Former astronaut and U.S. senator, John Glenn, and Neil Armstrong, the first man to walk on the moon, were among the luminaries in attendance for this important event. The Smithsonian anticipates an estimated three million visitors to the new facility each year.