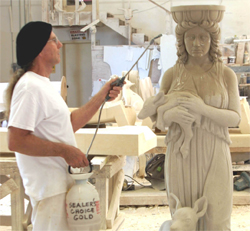 Since its conception in 1987, Texas Carved Stone has established itself as one of the largest stone handcarving shops in the United States. The company’s highly respected reputation is the result of a dedicated and talented team of skilled artisans, which is led by company founders Bob Ragan and Mary Condon. Operating in Florence, TX, Texas Carved Stone produces high-quality, unique ornamental stone pieces for upscale residential applications, as well as various commercial projects. And to ensure the long-lasting appearance of its architectural work, all of the company’s limestone pieces are treated exclusively with sealing products from Custom® Building Products, including its Aqua Mix® Penetrating Sealer and Sealer’s Choice® Gold. 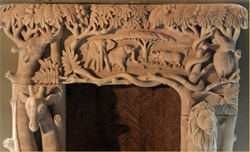 Although Ragan initially began his career as a stonemason, he always had a passion for carving. “I began carving limestone as a hobby, with a sharpened screwdriver and a ball peen hammer,” he explained. “On my next birthday, Mary bought me a full set of fine Italian hand tools and a block of Carrara marble.”

Eventually Ragan realized there was a niche for small specialty carving projects, and Ragan and Condon opened Texas Carved Stone. “There just weren’t that many people doing this,” said Ragan, who serves as head designer and carver.

Both Ragan and Condon are founding members of the Stone Carvers Guild — a group of independent, working professional carvers — and as a result, they are very careful in their selection of employees. Ragan explained that his skilled team of artisans carve in the traditional, classical, European manner, and that meticulous attention to detail is paid to each piece. Additionally, a relaxed environment is maintained inside the shop to inspire creativity.

With such an emphasis placed on the quality of its work, Texas Carved Stone believes it is crucial to use a premium sealer on all of its limestone pieces. Almost from the start, the company has relied upon Aqua Mix Penetrating Sealer.